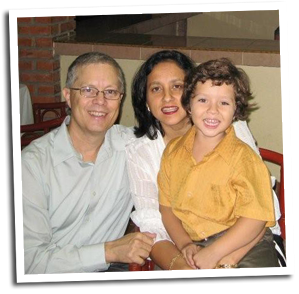 Born and raised in Memphis, Tennessee. He graduated from Middle Tennessee State University with a degree in Animal Science and a minor in Aerospace Technology. He spent 14 years on the family farm with his two brothers running their dairy in Fayetteville, Tennessee. After 14 years, the farm changed to beef cattle and John began to spend time doing short term mission work that included week long trips with his church youth at Mountain Top in east Tennessee. He also did mission work up to three months at a time in Alaska, Bolivia, the Island of Antigua, and in the state of Arizona. In 1998 he made his first trip to Honduras which last 15 months. He met and married his beautiful wife, Ana, while there. He helped design two housing projects with Armando Rodriquez and coordinated mission teams that came to work on the projects. He and Ana returned to the U.S. and lived in Tennessee for 4 years. They felt God calling them to return to missions in Honduras and did so in 2004. Their son, John Israel, was born in February of 2004. Together they have set up and run several medical day clinics in rural communities as well as local day clinics in the capital city of Honduras.

Born and raised in Tegucigalpa, Honduras. She graduated from the University in Tegucigalpa and went on to medical school. She graduated and had her own practice as well as working in an emergency room. She also worked in two hospitals while doing her required year of social service. She has worked for several different churches and missions in Honduras helping the poor and needy. She met her husband, John, while working with Methodist missionaries Armando and Alida Rodriguez. She met John while doing a medical brigade in Tegucigalpa after Hurricane Mitch destroyed Honduras in October 1998. They were married in November of 1999.

3 Trials & 1 True God COVID—DROUGHT — FIRES — TRUST Honduras is entering the 7th week mandatory stay at home orders. So much goes through your mind when facing something like this. Will I have enough food, will we catch COVID-19 (NO), what happens we have no cash....

From our Happy New Year letter in late January until now, who would have ever thought that most of the world would be in seclusion in their own homes. Dr. Ana and John and the people of Honduras are in lock down mode and only allowed to leave their homes on certain...

Friends, as most are under quarantine guidelines in America due to COVID-19, We, along with all the people of Honduras are truly house bound 7 days a week 24 hours a day. We were allowed Wednesday to leave our home to go to the grocery store and return home. We were...